I had a friend that was downsizing his life and moving into a studio apartment, which required him to take stock and organize his entire life.

He had to sort through all of his belongings to decide what to keep or throw out, pack everything that he was taking with him, and then finally make the move. On top of that, he was also selling his car after the move.

It was a lot to juggle, and he needed a way to stay organized and on task. He said he really enjoyed using Trello because it allowed for creating lists of lists, it displayed everything in front of you, and it allowed simple dragging and dropping of the items between lists.

The dragging and dropping feature sparked my interest. I’ve been using Evernote to track my projects, but always thought it felt a bit clunky. With Trello, everything is laid out in front of you so you know what needs to happen with a quick glance, and updating the lists is a breeze.

Here’s how I use it.

Like my Evernote system, I’m still using Getting Things Done to organize my projects. I did this by creating a Trello board named Projects/GTD, which keeps track of my ongoing projects

For example, I want my wife Julie to have access to my important online accounts, so I have “Organize online accounts for Julie” in the Ongoing list.

Here’s what that card contains: 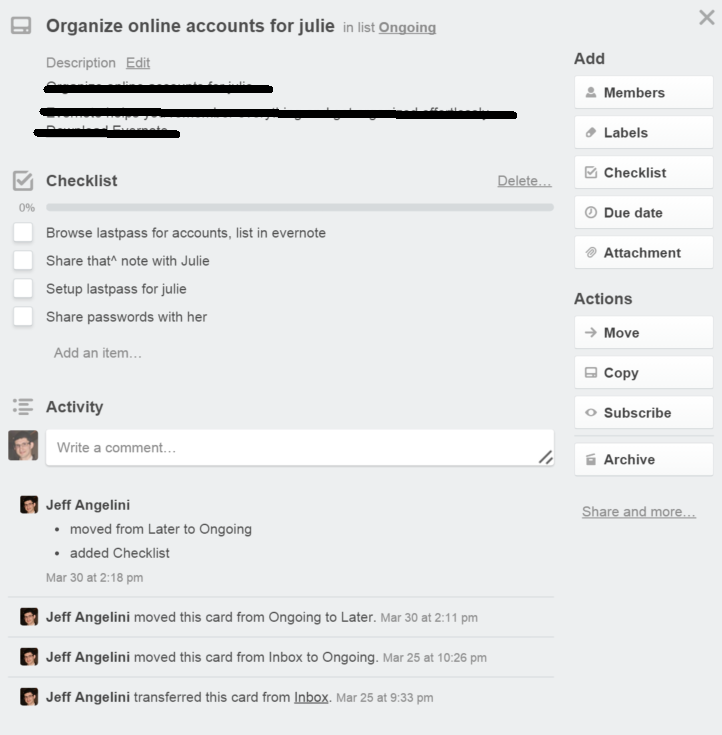 The important item is the Checklist, which keeps track of the steps needed to complete the project. The checklist contains:

You’ll note that I haven’t completely abandoned Evernote. I now use Trello to track my projects, but I archive the project cards when I’ve completed the project, so I store information in Evernote that I want to keep indefinitely.

Once I have the project in the Ongoing list, I create a card in the Next Actions list. I format the next action card like this: [project] – [next action].

So for organizing my online accounts, I have: “Organize accounts – browse lastpass, list in evernote”. The next action comes from the checklist in the ongoing project card. By listing the next action card like this, I can quickly scan the Next Actions list to see what needs to be done for each project.

And if a project is too big to manage within Ongoing and Next Actions, I’ll create a separate Trello board specifically for that project. But I rarely have to do so.

Everything comes through the Inbox list. Whenever I’m brainstorming and don’t have a specific card or list to put an idea into, I’ll stick it in the Inbox. I’ll then triage this list later, creating new projects, checklist items, or next actions.

A nice thing about Trello is you can add cards through email. Each board has an email address, and you can specify which list it goes to. For my Projects/GTD board, I have cards that are emailed in appear in the Inbox list.

I’m often on the go when an idea comes to me, so I’ve created an email shortcut with my Email Yourself Android app.

I created a shortcut with the board’s email pre-populated in the To field, so I can now quickly make a note and have it appear in my Inbox list. I also have a Trello board for work projects, and a corresponding Email Yourself shortcut for its Inbox.

You’ll notice the different colors on some of the cards, which are Trello labels. I use them for the context of an activity.

Trello has a nice set of keyboard shortcuts, and labeling is one of them. All you need to do is have a card highlighted and select a number, and it’ll label the card for you.

I manage my groceries with specific lists, and by moving items between lists.

The following lists keep track of where each grocery item exists:

Here are the other 2 lists:

Whenever we run out of an item, we move it into the Out list. When we’re compiling our grocery list, we move the items from Out into Grocery List. Trello makes this really easy with drag and dropping, in both the web and Android apps (I assume the iPhone app as well).

When I’m at the grocery store and put an item in the cart, I move it from the Grocery List list to where it’ll reside in the house (fridge, pantry, etc.).

Trello also has the idea of organizations so boards can easily be shared. You’ll notice next to the title of the board “Groceries” is “Kopp Angelini”, which is the organization that the board belongs to. Both Julie and I are part of the Kopp Angelini organization, so we both have access to the Groceries board.

I usually bring the same things on every trip, so I manage my travel items like my groceries.

Here are the lists:

I’m about to go on an annual camping trip called the Fishing Derby, so I’ve now created a list named Jeff Derby. I’ll scan all the items from my master list and put what I need for the trip into that list. Once packed, I’ll move the item from Jeff Derby to Jeff packed.

The lists also help when traveling back home. Everything I brought will be in the Jeff packed list, so to repack, I can just move them back into Jeff Derby.

And now that I think about it, I’m going to start using labels for my recurring trips. My yearly trips are the Fishing Derby, Maine, our anniversary, and Ohio for the holidays. By using labels for each trip, it’ll be easier to scan for the items I need. I might not even need a list like Jeff Derby. I can just drag labeled items from Master Jeff to Jeff packed.

Like the Groceries board, the Travel Lists board belongs to the Kopp Angelini organization, so Julie and I both have access to it.

Check out my android app Email Yourself if you want to create an email shortcut with your Trello’s Inbox’s email address saved.